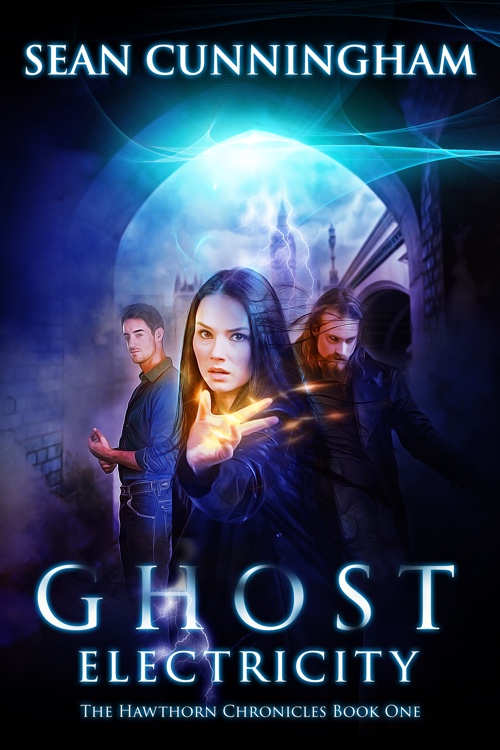 Ghost Electricity is out now as an eBook on Amazon and in Kindle Unlimited, with a special new release price of 99c/99p.

Set in modern-day London, Ghost Electricity is a story blending history, fantasy and epic adventure. Julian, a warlock; Rob, a werewolf; Fiona, a girl with a monster in her shadow; Jessica and her automatons – each of them is just looking to make their way in the world. But the world has other ideas. From getting jumped by vampires on the way home from the pub, for these guys “just trying to get by” gradually escalates into a danger that threatens all of London.

I had the idea for these characters for quite a while before I started writing their story. At first they just sat in my head, doing nothing no matter what I came up with. But then my brother, who came over to the UK a year before me, told me that he was planning to move back to Australia permanently. Having a family connection here in England had become important over the years we were here. I knew I’d miss him once he was gone.

And then I had the story: of four isolated young men and women finding each other. While fighting vampires and other monsters that lurk in the dark.

London is rich in inspiration. The lost rivers that were gradually paved over. The shape of the Roman city of Londinium, still visible in the street layout even today. The companies that built the city’s train network, now remembered, if at all, in the names of the different London Underground lines. The Great Fire – did you know it took days to cross the city?

And the story of what the city has done over the millennia with its dead. The plague pits. The church graveyards packed and re-packed with coffins. The Victorian entrepreneurs who built the city’s circle of vast cemeteries. The London Necropolis Railway.

But a story has to be about its characters. Rob and Julian, Fiona and Jessica, they have rich inner lives and intricate backstories. You’ll get to know them more as you turn the pages and I hope the more you learn, the more you’ll want to know. They are each on an important journey of their own. But, like all journeys, it’s better in good company.

Ghost Electricity is the first book in The Hawthorn Chronicles. I have many more adventures planned for the tenants of Hawthorn House. Those adventures begin here. I hope you’ll come along for the journey.