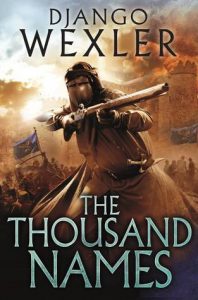 I tried flintlock fantasy a while ago and didn’t get into it. But I kept seeing Django Wexler’s The Thousand Names crop up and figured I’d give it one more go.

The Thousand Names is inspired by the Napoleonic Wars. Rather than the usual swords and castles of high fantasy, the soldiers of the Vordanai Colonials are armed with muskets and sabres, backed by the cannons of an artillery team. And while a great deal of the setting is hinted at in this first novel, we begin on the frontier.

The solid Captain Marcus d’Ivoire just wants to keep himself and his Colonials alive. Winter Ihernglass, a runaway, is trying to survive and keep her identity as a woman secret. When the brilliant and enigmatic Colonel Janus arrives and starts the Colonials on a dangerous journey, he challenges both their worlds.

Marcus and Winter are both great characters and a desire to keep reading about them keeps pulling me through the series – I’m onto the fourth book now and I’m definitely on to the end of the series. But the author also does a great job with Janus, slowly creating questions around him that will keep you hooked.

The first half of the book is almost straight-up historical military fiction. Wexler’s wargaming experience shows here, as his battles are crisply and confidently described. I’ve seen comments that sometimes Wexler goes into a touch too much detail at times, but I personally never found this to be the case. It all lent an air of authenticity to what I found to be exciting battles.

And then the magic creeps in: the Thousand Names. A fascinating magic system, well-realised and clearly described. Wexler keeps it small-scale, but when soldiers armed with muskets and sabres go up against those wielding magic, well, things get hectic.

I’ve been recommending these books all over the place. If military fantasy sounds like it might be your thing, if you’d like to try a setting based on a different period of our history, then try The Thousand Names.