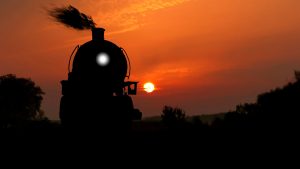 The Railway Mania of the 1840s: Railway company after railway company, a speculative bubble that eventually burst. All the usual foolishness and ruin of a financial bubble, but unusually with one tangible result: an extensive British railway system.

What did the Earth look like X million years ago? See the continents shift across millions of years. I always thought it was just a couple of basic big moves, the supercontinent Pangaea, which broke up into Laurasia and Gondwanaland, then kept breaking up into the continents we know today. But the shifts are cyclical, with many supercontinents and break-up cycles before Pangaea.

You should always be careful when you give me a map.

Artist Illustrates His Battle With Depression as a Mystical World of Spirit Animals: Beautiful and haunting. Also on Instagram.