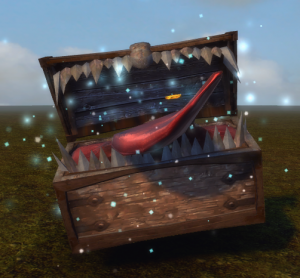 I pummelled the bandits with bolts of ice. Jander, my companion, slashed and hacked at them with his sword. When the bandits were dead, we strolled into their rundown shack. They had a treasure chest. I tried to open it.

A giant tongue lolled out of the chest. It tried to kill me. I yelped so loud my girlfriend asked me what was wrong from the next room.

This is the game Neverwinter. I’m playing a control wizard named Talos, which means I shoot ice spells around and try to either freeze or slow my enemies. Jander is a computer-controlled warrior who stands around flexing his biceps when I’m not in combat.

Neverwinter is a Massively Multiplayer Online Roleplaying Game. It is, perhaps, not quite on the scale of World of Warcraft. But if you’ve ever played the pen and paper version of Dungeons and Dragons, if you’ve ever adventured in the world of Faerun, it can be a fun return to a world you know.

Despite having next to no spare time, I’ve managed to play a little of this game over the last couple of months. At first it was a pleasant nostalgia. The names of familiar gods. Cities I know, like Baldur’s Gate, where I adventured long ago as a different kind of mage with Minsc and Boo and all the others.

But the stories themselves began to pull me in. Orcs festooning one part of the city. Wererat gangs in the sewers. A weird but enjoyable storyline that pitted me against a wizard trying to open a portal to dimensions full of Lovecraftian horrors.

At Halloween, some kind of illusionists were running around the city. I got to see gelatinous cubes ooze by. Everyone should see a gelatinous cube oozing by. Preferably away, as well.

And then, the Mimic in the bandits’ shack. A treasure chest with a giant tongue and an appetite for adventurers. A favourite of Dungeon Masters looking to catch their players off-guard.

It isn’t the same as playing across the table from my old Dungeon Master, Peter Ball. But it’s a fun game to play.

In those odd moments when I have a sliver of free time.